The stress in a body is defined as the force acting per unit area. In practice, due to the presence of multiple forces and the body geometry, stress values vary throughout the body and may lead to areas of stress concentrations. But we will show that even on a single element, the stress is dependent on our frame of reference and therefore stress transformations are often used to find stresses in different orientations of an element.

Consider a body on which there are several forces acting. We can isolate an element of unit area around a point P and measure the stresses \(\sigma\) and \(\tau\) along Cartesian axes as shown. 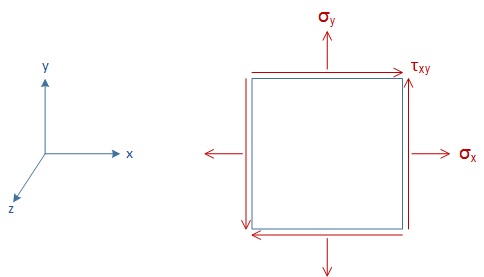 Stresses acting on an element in 2 dimensions

Let us now cut another element around the same point P but at an angle \(\theta\) to the x-axis. The normal and shear stresses acting on the element will be different. Let the x prime axis be at an angle to the x axis. 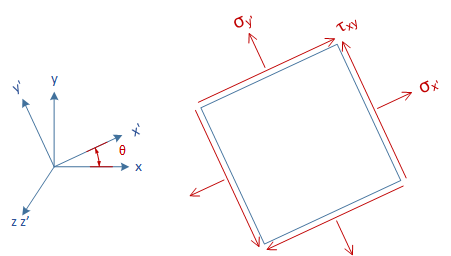 Therefore the stress we measure on an element around a point is dependent on its orientation. Since stress is a tensor, matrices are used to fully express the stress state in a material. For a 2D element, the matrix has the following form:

The following 3 stress transformation equations can be used for finding the stresses at other orientations than the one in which we are given.

Christian Otto Mohr was a German Engineer who developed a way to graphically express the above stress transformation equations. His method makes it simple to understand stress variations on the element with changes in its orientation. His diagram is known as the Mohr’s Circle. 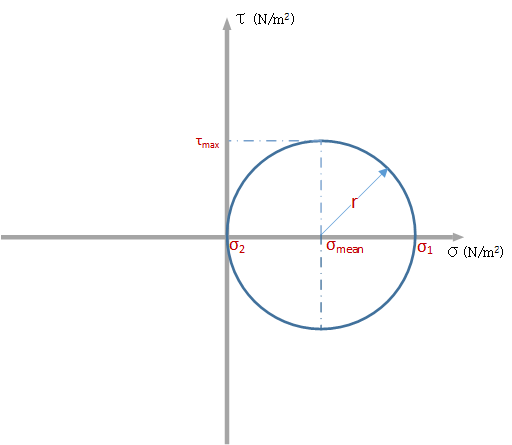 Mohr’s circle is used to represent the stress tensor graphically

The circle itself is drawn by making use of 2 quantities, the average stress \((\sigma_{avg})\) and the radius \((R)\). Once the circle has been drawn, it becomes possible to extract additional information such as the principle stresses and the location of the principle axes from the plot.

Since the stress values vary depending on the angle \(\theta\), there is a special orientation at which the normal stresses \(\sigma\) will be maximum and minimum. These are known as the principal stresses. They are denoted by \(\sigma_1\) and \(\sigma_2\) with \(\sigma_1\) having the highest value.

There is a special orientation at which the normal stress is maximum while the shear stress is zero. These are called the principal axes and are denoted by 1 and 2.