Drilling is a very common operation used for making holes in a material. The tool used is called a drill or drill bit. The drill bit is made to rotate and moves into the material to form a hole. These tools can have high length to diameter ratios, thus allowing deep holes to be made. The chip formed moves in the opposite direction to the feed. 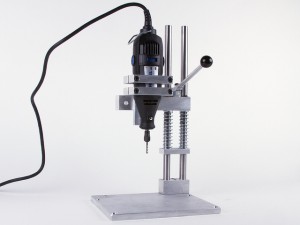 Drills come in various shapes and sizes and their use depend on the operation being performed. For example, twist drills with two flutes and two cutting edges, are used for drilling holes. Other types of tools exists for making counter-bores and counter-sinks.

The flutes serves as an opening for lubricants to get into the drill region and also as a path for chips to move out of the hole being made.

There are two speeds involved in a drilling operation, namely the cutting speed and the rotation speed of the drill bit. They are related by the following equation:

By using the concentrated energy in a laser beam, a material can be made to melt at localised points. This principle can be used for making holes with very high accuracy. There are several methods used in practice such as direct, percussive or trepanning drilling when using lasers.